His Holiness Jagadguru Sri Shivarathri Rajendra Mahaswamiji established Sri Shivarathreeshwara Dharmika Datti in 1986 for the propagation of religion, literature, arts, and culture. The objective of Datti is to publish books related to dharma and philosophy, arrange discourses like Shivanubhava Dasoha, spread religion in rural areas and conduct spiritual and personality development camps for all age groups. Sri Shivarathreeshwara Award is also conferred by this Datti to those who have enriched the religion, literature, history, art, and culture with their literary works. 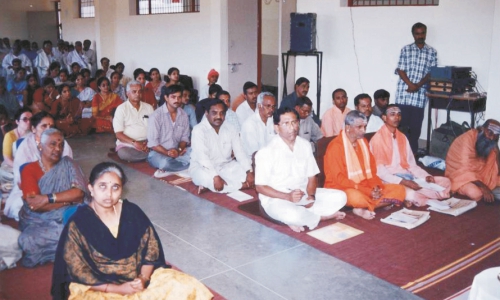 Sri Shivarathreeshwara Dharmika Datti has been conducting personality development camps for the public, pontiffs, medical practitioners, farmers, youths, students, and other individual categories at Suttur, Mysuru and Ooty every year. These camps aim at the overall personality development of the participants by conducting discourses on matters related to individual life, Q and A sessions, and other related activities.

Sri Math also held a camp for the Karnataka Legislators in September 2000 at Suttur. The success of that camp-inspired Sri Math to conduct another camp in 2008. The three-day camp was attended by the Members of the Legislative Assembly and Legislative Council across the political parties. A team of scholars and spiritual leaders conducted sessions on various topics ranging from nation-building to the role of religious institutions in rural development.

The Govt. of Karnataka had organized a 3-day ‘Chintan Baitak’ (brainstorming session) for its council of ministers in 2009 at Sri Suttur Srikshetra. The then Chief Minister of Gujarat, Sri Narendra Modi, inaugurated the camp and addressed and interacted with the ministers.